You’ll find a small quiz after this section, so please read the following carefully.

English as a global language

As you may know, English has been used very widely as an international language. Here are some statistics to show the widespread use of English.

Who are the English speakers?

As you can see above, English has been used quite widely all over the world. So we can say that English has become a truly global language. So who exactly is speaking English? Are most of them native speakers?

The following table shows the top 10 languages in the world in terms of the number of native speakers.

As you can see, English is only ranked second in terms of the number of native speakers. The Chinese language has actually more than twice native speakers than the English language. It is estimated that there are about 400 million native English speakers worldwide. The word population is around 7.5 billion, so this means that native English speakers account for only 5% of the world population.

As you can see, English is ranked number 1. This means that although English is number 2 in terms of the number of native speakers, English has a lot of people who speak it as an official language.

The above discussion suggests that there are more non-native speakers of English, compared with native speakers. Braj Kachru, a famous linguist (you’ll probably hear his name in a number of linguistics lectures here at CIC), divided English speaking countries into the following three categories: inner circles, outer circles, and expanding circles.

The following figure shows the number of speakers in each circle: 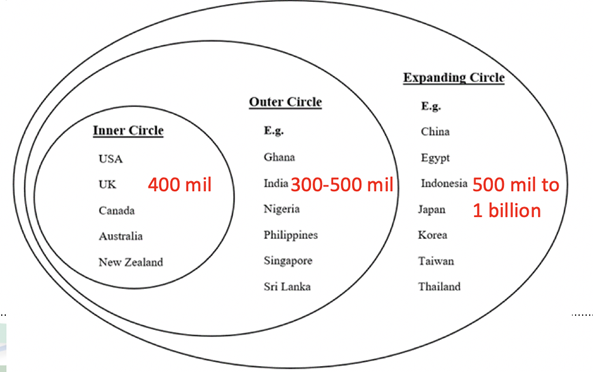 Why did I talk about this? Well, although the language of instruction is English in this class, CIC is not a language department, and this is not a language course either. Hence, your homework, presentations, and papers etc. will be graded primarily on content, not language.

Also, it’s okay to make mistakes. You don’t have to speak or write like a native speaker because 75% of English users are non-native speakers. Having good grammar or vocabulary is great, but willingness to communicate and speak out, even with the wrong vocabulary, not perfect grammar, and not perfect pronunciation, is also very important for successful communication.

Now, I’d like to invite you to take a short quiz about the contents covered in this document. You may review this document while you take the quiz. The results of this quiz will count toward your grades, so please review your answers carefully before submitting your answers.

Please log in to Google Classroom and take the quiz (World Englishes: Quiz).