What do we mean by “culture”?

In this week’s class, we will talk about intercultural communication. First of all, let’s look at what we mean by “culture.” For instance, if I say “American culture,” what comes to mind? Maybe the Statue of Liberty or McDonald’s? How about “Italian culture”? Pizza, pasta, and the Leaning Tower of Pisa? How about Japanese culture? Sushi, sumo, and ninjas, perhaps?

In a book titled “Different Realities,” the authors define culture as follows:

One important thing to remember is that culture is like an iceberg. This means that we tend to focus on what we can see, hear, and touch, but we should also try to see something that is hidden and invisible, such as beliefs, values, or way of life. In other words, instead of looking only at the tip of the iceberg, we should also try to think about what is at the bottom of the iceberg. 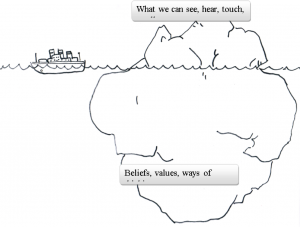 Let’s look at a couple of examples. In Japanese, people use honorific language (敬語) for people who are older. For instance, in high school, I think most of you used honorific language for sempai (senior) students, even if they were just one year older than you. Some people from outside Japan finds this a bit strange.

So “people use honorific language for people who are older” is the tip of the iceberg. Can you think of what is at the bottom of it? What kinds of values or beliefs are underlying the special language for older people? We could argue that the influence of Confucian (儒教) ideas and respect for older people can be found in the use of honorific language.

However, once again, this is just the tip of the iceberg, and we should try to think more deeply about the reason. Can you think of what is at the bottom of the iceberg? Why do most Japanese students seem reluctant to speak out during classes?

One reason may be respect for older people and authority. Another reason may be group-oriented culture of Japan, as exemplified by the saying “The nail that sticks out gets hammered down” (出る杭は打たれる).

So an important lesson here is that when we meet someone from different culture, we tend to focus on what we can see, hear, and touch. However, if we are concerned too much about the tip of the iceberg, we might get confused, frustrated, or even angry, because we cannot understand why some people act like the way they do.

Sometimes we need to think deeply about why people from certain culture behave in a certain way. Thinking about what is at the bottom of the iceberg is the key to successful intercultural communication.

Now let’s look at one example of critical incidents:

Did you understand what happened in this story? What was the basic cross-cultural misunderstanding?

Now, I’d like you to answer the following questions regarding the above passage.

Please click on the link below to answer the above questions.

(Please log in to Blackboard at https://bb.rikkyo.ac.jp/ before clicking on the above link)

Let me explain homework for the next class. For this week’s homework, I’d like you to write about any critical incident that you (or somebody you know, such as your family or friend) had in the past.

To recap, critical incidents are defined as situations that cause confusion resulting from cultural differences, for at least one of the people involved, such as the story we read about Junji.

At the end, please also write about what you think caused cultural misunderstanding. In other words, think about what was at the bottom of the iceberg (e.g., beliefs, values, or way of life). Was there anything happening that people involved could not see? For instance, for the story about Junji, you could argue that the misunderstanding happened because what is means to be polite, and therefore impolite, can differ between cultures.

Here are some more details:

To submit your writing, please click on the link below:

I look forward to reading about your critical incidents. Well, this is it for today. Hope you have a good weekend and see you next week!

Questions about the course (Blackboard)

(Please log in to Blackboard at https://bb.rikkyo.ac.jp/ before clicking on the above link)